The present chapter will introduce all the modules in the src directory. The modules are organised in alphabetical order. 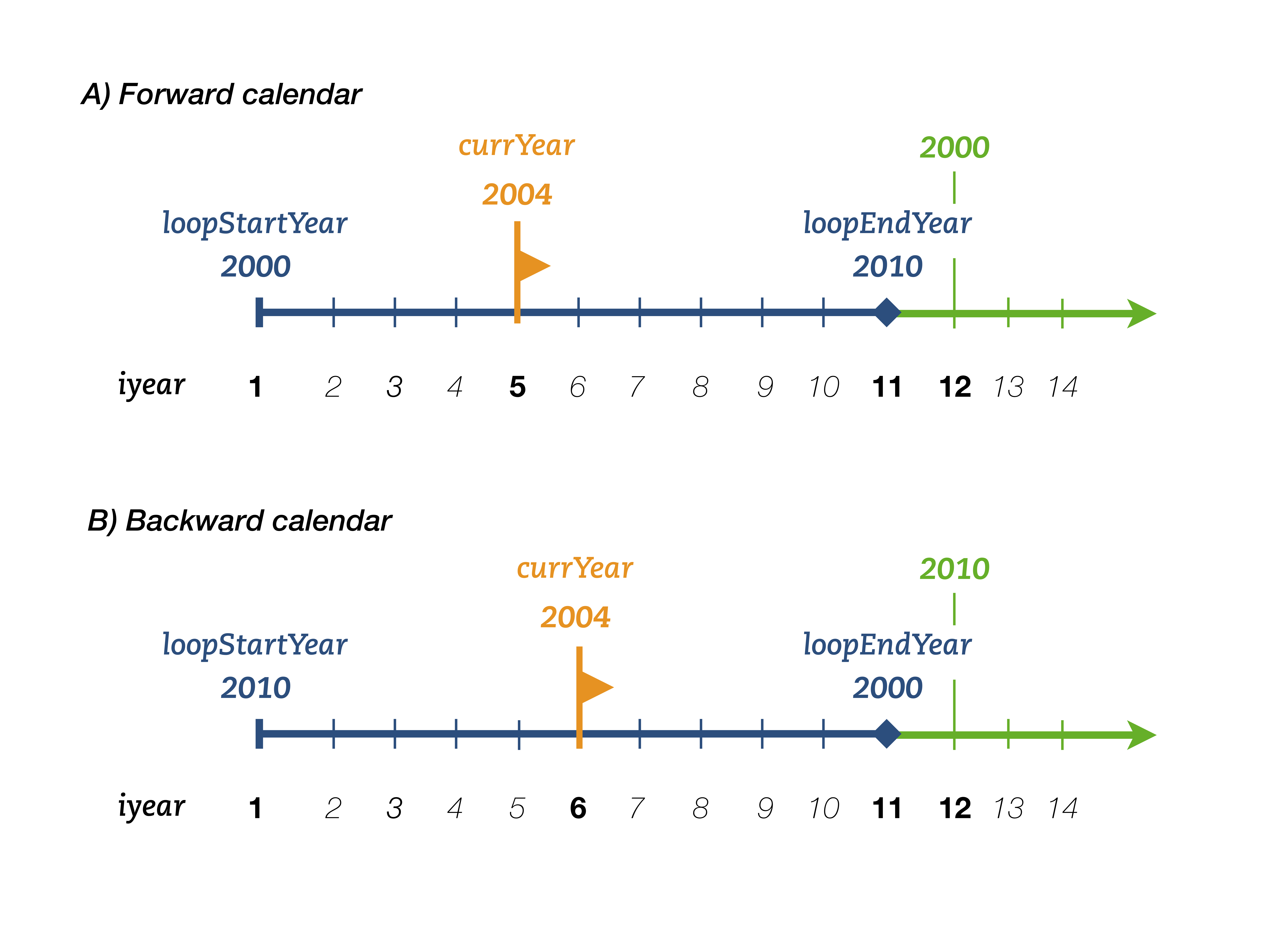 The module mod_clock calculates the new time step referenced to the initial time step. This module contains one subroutine update_time. 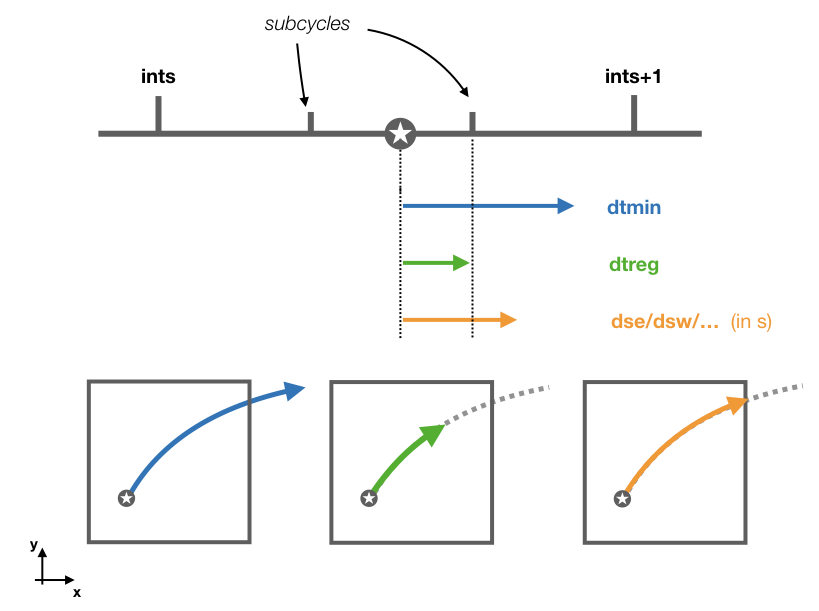 The subroutine updates tt and ts based on the value of ds. This is transform to a time step in seconds dt by multiplying ds with the volume dxyz. The subroutine chooses between the smallest of three different time steps:

1 - dtmin which is the time step between two time subcycles where iter is the number of subcycles.

2 - dtreg which is the time step to the next time subcycle.

3 - And the time step corresponding to the smallest wall crossing time computed with cross_time.

After updating the values of tt and ts, the new values of intrpb and intrpr are computed.

The module mod_diffusion adds a random displacement to a trajectory. Diffusion is activated by setting l_diffusion to TRUE. This module contains two subroutines: diffuse and displacement.

⚠ Warning:
By activating diffusion the calculation of stream functions is deactivated unless they are computed offline and write_frec is set to one or two. 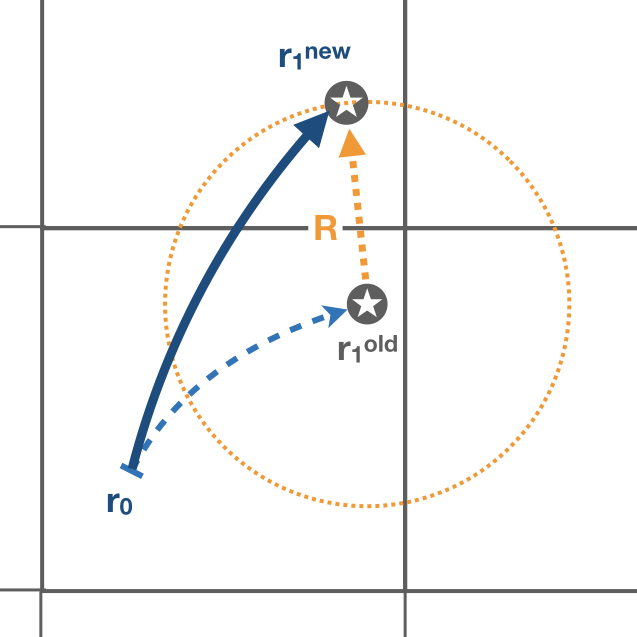 where represent random numbers defined between zero and one.

The module mod_divergence computes divergence/convergence of all the tracers defined in the namelist. This module will be activated if both l_tracer and l_divergence are TRUE. 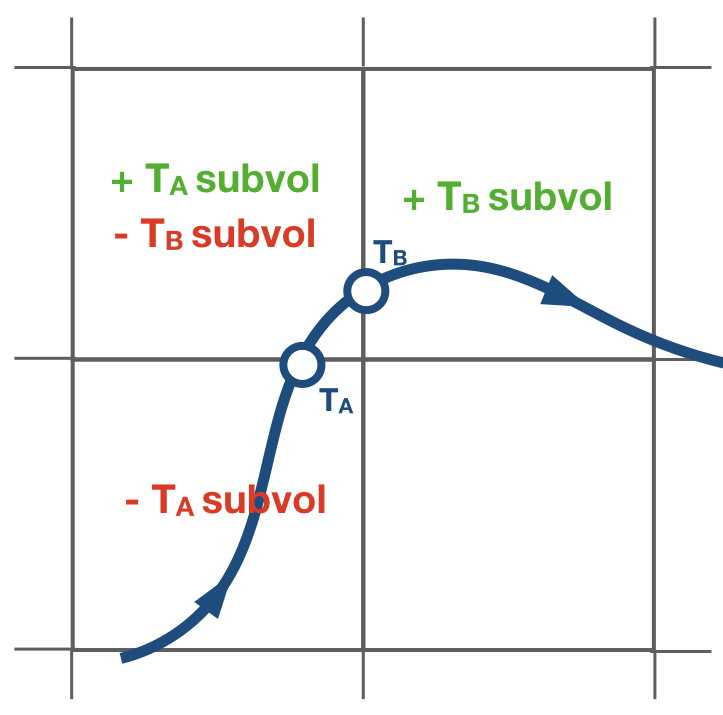 Note:
The tracerdiv is divided by the area of the gridbox and multiple the constant described by divconst. A different constant value can be assigned per tracer.

The module mod_error check for possible errors in the simulation. If any error is found a diagnostic file with a summary of the error is created. This module contains two subroutines and two private function: errorCheck, write_error, errorType, and reverse.

Note:
If the original data is reduced to a subdomain, both functions will only extract data in the selected subdomain. For the case where the subdomain crosses the zonal limit of the original domain, the function will read separately the two subdomains and then join them into a unique subdomain (blue domain). 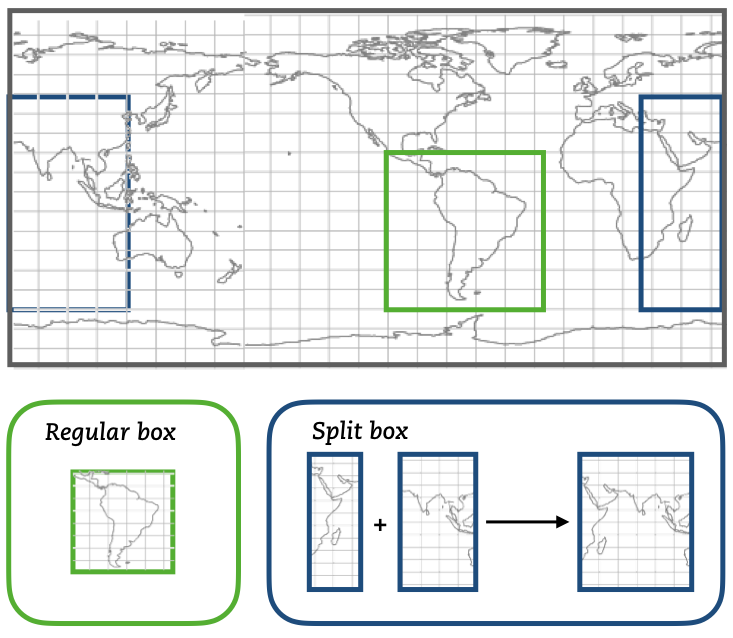 The module mod_init consists of two subroutines: init_namelist that reads the namelist, and init_alloc that allocates all the allocatable arrays. More information about the namelist can be found in the Namelist chapter.

It contains an internal subroutine reverse to adapt the meridional indexes to the TRACMASS reference system.

The module mod_loop is the core module of TRACMASS. This module contains the big loop that updates the calendar, the clock and the position of the trajectories. 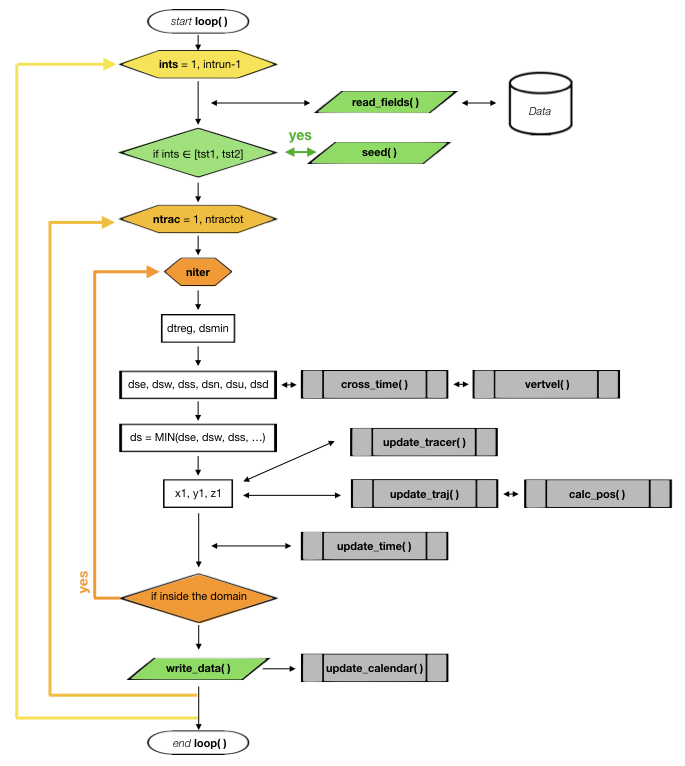 1 - First the fields are updated according to the value of ints.

2 - Then, if the time step corresponds to a seeding time, the subrotuine seed is called.

3 - Then the loop checks all the possible trajectories given by ntrac. If the trajectory is not activated the module while skip it.

4 - If a trajectory is activated it will be iterated several times where its position will be updated (update_traj).

5 - If the trajectory exceedes the limit time timax, it will be deactivated.

6 - After each iteration the calendar is updated.

Note:
If all the trajectories are deactivated the simulation will be stopped even if the corresponding time step is not the final one set by intrun.

Both modules mod_pos_tstep.F90 and mod_pos_tanalytical.F90 calculate the new position of a trajectory and the time it will take to cross a wall in the gridbox. However, each of these modules computes the crossing time using different schemes. Currently two different schemes are available: regular time step scheme (default case) and the time analytical scheme (which can be activated in the project Makefile). Each of these modules contains three public subroutines: cross_time, calc_pos, and update_traj. Only the subroutine update_traj is common in both schemes.

Note :
By default trajectories can reach the last vertical level km and will be flagged with the exit flag one. However, by activating l_nosurface trajectories are prevented from reaching the surface. Instead, they are placed back in the middle of the last grid box (ka = km).

Note:
If stream functions are computed online (l_offline is false), this subroutine will transfer the required information to compute geographical streamfunctions.

Important:
The north fold (jperio) is an important feature for original grids that are not based on latitude longitude such as the ORCA grids. The current version includes two possible corrections to the north fold: no correction (0), and correction for ORCA grids (1). 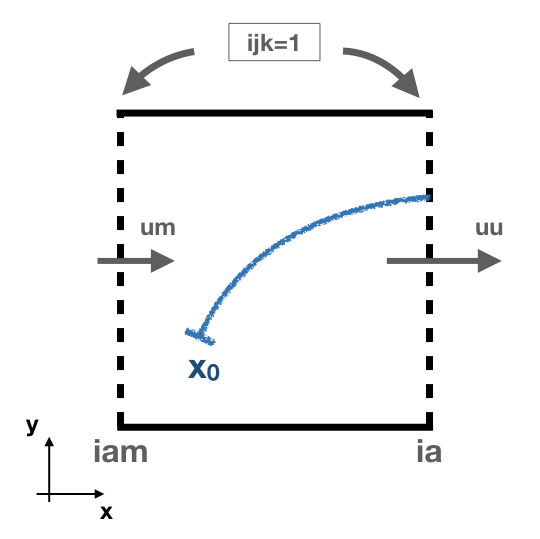 Note:
The equations used to compute the crossing time considers a different spatial interpolation of \(U(x)\) for sn. The crossing time through the western wall is given by the following equation \(t_{W} = \frac{1}{U(x_W)-U(x_E)}\log\left(\frac{U(x)}{U_W} \right)\).
⚠ Warning:
If the trajectory is placed at \(U(x)=0\) in a divergent field, calc_pos is not able to determine the new position (unstable equilibrium).

The module mod_seed defines all the variables and arrays neccesary for the seeding of particles. This modules contains two public subroutines (init_seed and seed) and three private subroutines (split_grid , read_mask, and reverse) 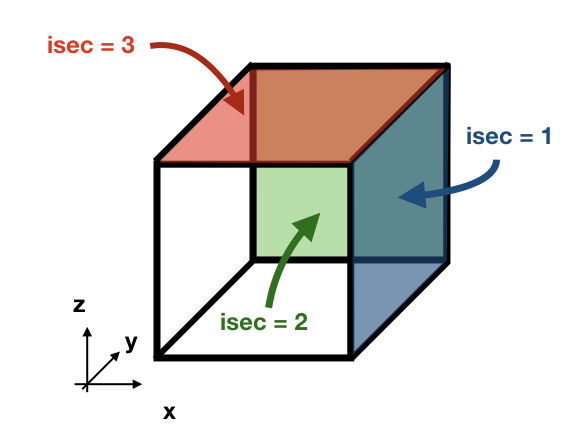 Note :
If the simulation is backward in time (nff = -1), idir represents the last direction of the trajectory to follow. For example, let us consider a eastward flow field. A simulation with nff = -1 and idir = 1 will follow trajectories back in time that initially are moving eastward.

The initial seeding location, time, and direction can be defined directly in the namelist or read from a file. This is control by seedType and seedTime.

Important :
The mask file only will be read if seedType is set to one. The mask array is two dimensional and has the dimensions imt x jmt. If a mask file is provided (maskFile), only the values where mask=1 (marked in orange in the figure) will be selected for seeding.

The reading of the mask file is done by the internal subroutine read_mask. The indexes in the mask file are in the original file reference system.

The seed subroutine populates the trajectory array that contains the position of the trajectories as well as their corresponding volume/mass transport. This module works this way:

1 - The subroutine checks if the current time ntime corresponds to a seeding time. 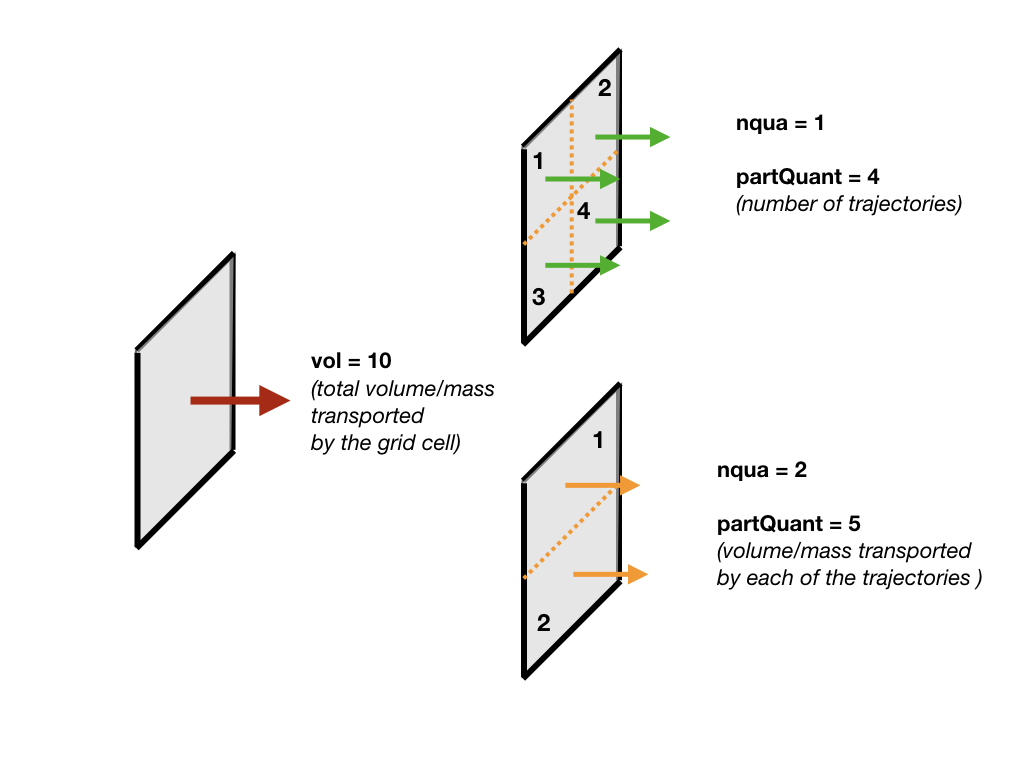 5 - The specific volume/mass transport of a trajectory subvol is computed from num.

6 - The trajectories are placed in the middle of each of the rectangles. This initial position is given by x1, y1, z1.

Important :
x1, y1, z1 are computed using the gridbox as a reference.

7 - If TRACMASS is rerun or run to compute streamfunctions, only the trajectories that exit through a kill zone will be activated. Besides, if l_tracers is true, the trajectories outside the tracer limits tracer0min and tracer0max will be deactivated.

8 - The position of the trajectory in the gridbox reference system, the trajectory number ntrac, the corresponding position index and the mass/volume transported by it is stored in the array trajectories.

The private subroutine reverse adjust the seeding indexes to the TRACMASS reference system.

Note :
The last three cases are only computed if l_tracer is TRUE, where mr is the tracer space resolution (501 by default) and numtracers is the number of tracers. 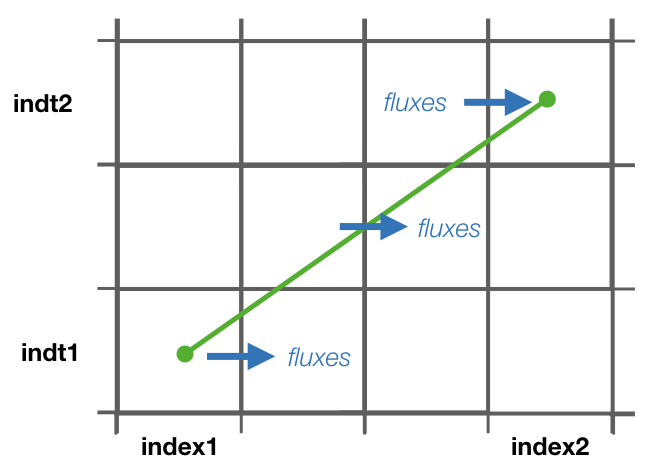 Note :
This is an example of how a stream function is computed. Consider two trajectories (A) with the same volume/mass transport. The computed fluxes are shown in (B) where blue represents positive fluxes and orange negative fluxes. Notice that the region where both trajectories cross the same wall the resulting flux is zero as they cancel each other. The resulting stream function (C) is computed integrating in a downward direction.

The module mod_subdomain.F90 is responsible for defining a subdomain and updating the indexes according to the new domain. Defining a subdomain is useful to run TRACMASS with high resolution data especially if the area of study does not cover the whole original domain. Two types of subdomain can be declared: a regular box (imindom < imaxdom) and a split box (imaxdom < imindom).

Note :
The subdomain is only defined in the longitude-latitude space. 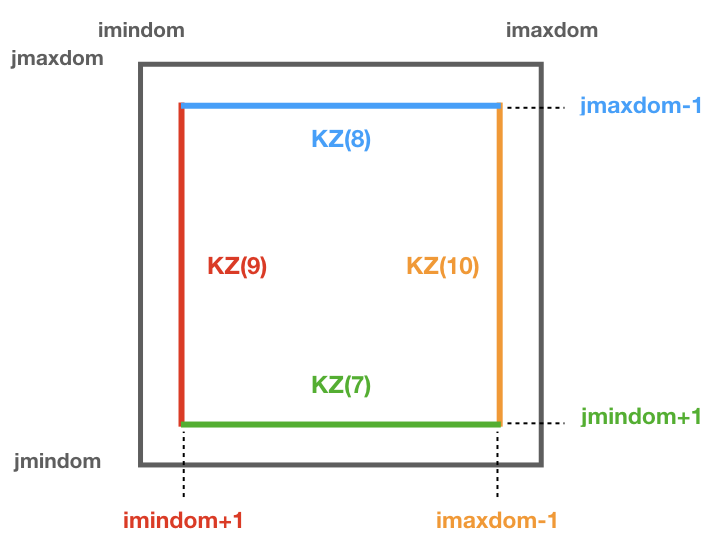 The module mod_swap.F90 is responsible for updating the time indexes for those variables that are time dependent (for more information check the description of read_field.F90) and reversing the fluxes if the trajectories are run backward in time.

If TRACMASS is run with tracers (l_tracers is true), the module mod_tracers.F90 contains all the subroutines needed to initialise, allocate, compute and update tracers.

Important :
To compute stream functions it is important to define the lower (minimum) and the upper (maximum) limit of the tracer coordinate.

mod_vars.F90 is a collection of different modules that define the required variables for the different components of TRACMASS. This file contains 10 modules:

The module mod_vertvel computes the vertical volume/mass fluxes. If TRACMASS is setup for two dimensional fields, or the vertical velocity is part of the dataset this module is not activated.

This module contains a single subroutine vertvel that computes the vertical flux using the following equation:

This equation is integrated from the bottom (ocean) or the TOA (atmosphere) to the level ka.

⚠ Warning:
If a particle is not terminated it will not be stored in the _rerun.csv file. 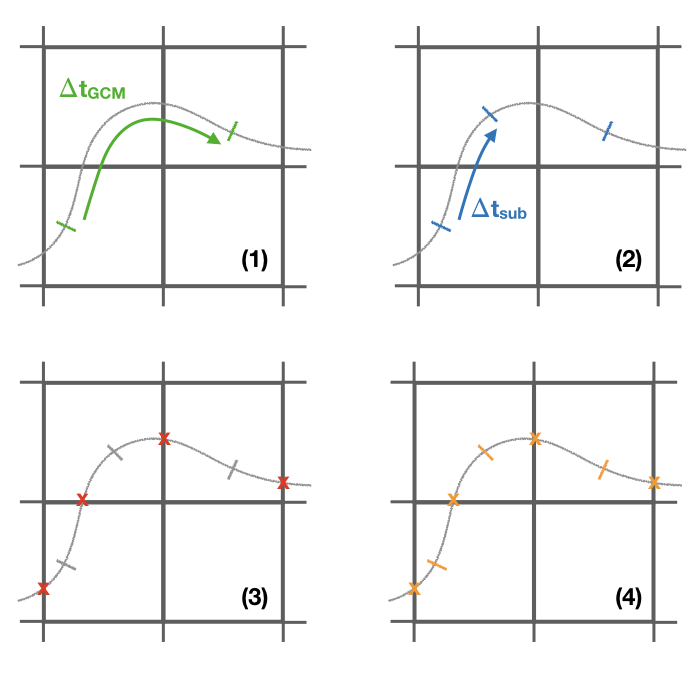 The initial and the final information of the trajectories are always stored. However, the frequency at which data is stored in the _run.csv is controlled by write_frec: (1) only at GCM time steps, (2) only at GCM and subcycle time steps, (3) only when a trajectory crosses a wall, (4) all time steps, and (5) no data stored. The time format of the output files can also be adjusted with timeformat: (0) tt is stored, (1) ts is stored, (2) the time is saved in YYYY-MM-DD HH format.

Important:
If TRACMASS is run with tracer divergence computation, this module also writes the results in the file: _div.csv.